We were leaving the Kimberley, setting off from the King George River. We had before us the potentially nasty stretch of water known as Joseph Bonaparte Gulf, or alternatively known as "Blown apart Gulf"...  220Nm of it to Darwin. On the way out a cat crossed the river mouth, “Dog on Cat”. Susie hailed them on the VHF to get weather info, should be plain sailing was the reply, all westerlies which sounded good to us. It was an easy run in light breezes, Ashiki made 70 miles the first day, 60 the second and 50 the third. Adverse currents and calms eventually getting the better of her. But not to worry, it was all lounging around reading our kindles, as the windvane connected direct to tiller did a sterling job leaving us with little to do, most the time..


The few times we did motor, and never more than an hour, involved hand tillering which we don’t like, as the windvane doesn’t work in that case. Oh for an electronic tiller pilot. The winds were quite flukey during the last couple days too which doesn't suit the wind vane either, lots of climbing into the cockpit for readjustments, through the night even. 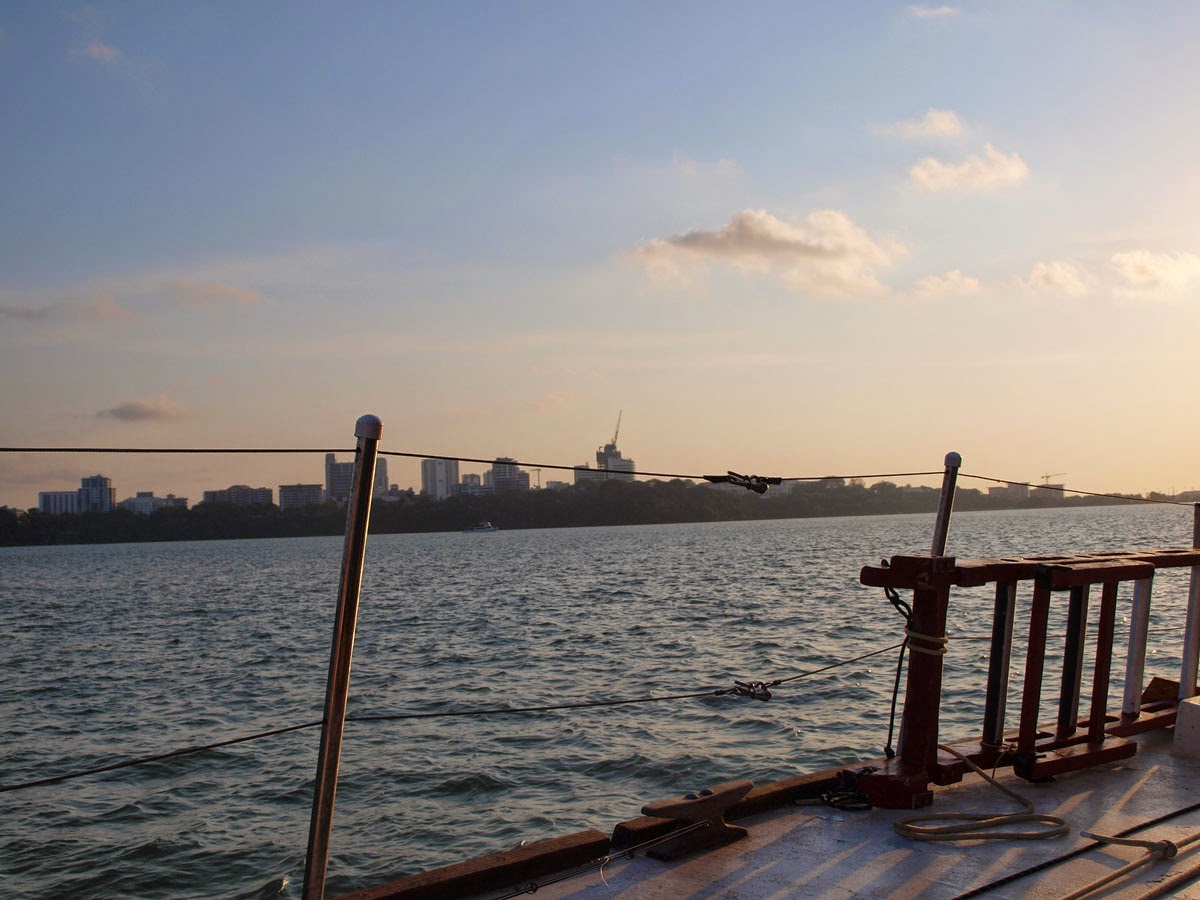 Darwin was a sight for sore eyes, the first sign of civilisation for two months. Its looking quite different to what I expected, shimmering white towers on the horizon, like a mini Singapore !? Eh… Darwin? The tides defeated us again on the final approach, electing to anchor across the bay from the city, in one of the few spots without marine cables, gas pipelines etc which are generally anchoring prohibited areas.

By morning we sailed, with all panels up, rounding the bottom of Darwin and anchored in Frances Bay near the mouth of “the creek” just as the tide was turning, and with the motor conking out.. Ashiki sailed the last 30 yards to drop anchor. (New spark plug was needed.) Our first foray into Darwin was via the famous Dinah Beach Yacht Club. I say “famous” because the place for me was immortalised in Kris Larsen’s book “Monsoon Dervish”. Quite the tome, highly recommended. (A bloke who sails out of Tasmania with $1.50 in his pocket, his only piece of nav equipment is a compass, which doesn’t work because it’s a steel boat and tosses it overboard..  it’s interesting reading!) I was hoping to meet the author at Dinah Beach, where he apparently is a fixture, but alas, he is off again to places intrepid in his trusty, and austere vessel, Kehaar.

We tied the dinghy to the floating pontoon, the tide went out and we could't leave for the next 5 hours..

Darwin, what can I say, historic charm gone? I think Tracy took it away, that being the 1974 “beyond category” cyclone, which registered 200mph at the airport before the measuring equipment disintegrated, then practically wiped the place clean. 30,000 souls were subsequently airlifted out in what became Australia’s biggest airlift in history. Can’t blame the place for everything rebuilt new, its bigger too, 145,000pop, but alas, looks like Gold Coast developers have had a hold the joint this past decade, it looks like any Aussie city. :(

There are plusses, as we settled into Dinah Beach dinners, $8 for fish’n’chips and $5 beers…  this place is like the working man’s yacht club, with the odd intrepid sailor thrown in, no white shoes to be seen. :)  They have live music 6 or 7 days a week, never heard any other "yacht club" doing that!

Of course we visited the museum to pay homage to sweetheart. No intrepid sailor passes through Darwin without doing so :). Maybe because the beast evokes such circumspection on one’s mortality, or lack of it in her jaws.. she being a 5m croc. I may be a little unfair, sweetheart never hurt anyone. Her aversion to outboards was her only crime, being 300 years old I would have thought she’d understand the temporary nature of human civilisation, if she kept low profile for the next hundred years, I’m sure she would have had her creek back to herself… instead of her eventual fate, under the knife of the taxidermist.. Yampi Sound is not an unoccupied patch of water. It is remote busy place with Iron ore carriers, barges, pilot boats and helicopters as there are two active iron ore mines here; Cockatoo and Koolin Islands. The ore from here is too pure, they cut it with common dirt to get it down to parity, for the price. Too bad the settlements there are private, no access for us cruisers. There is a 3G tower here, but its Optus! Not working with our Telstra phone.

We ended up visiting the famous squatters of Silvergull Creek. Well worth the effort. Originally the squatters shack was built by Phil and Marion, by the time we were there, they had moved on and swapped with another couple, Mal and Shelley. What good value they are! A pleasant few days floating around their water tank (constant supply of running spring water) and drinking home brew and chatting to fellow intrepid sailors. I won the darts game :)

Next stop was Dugong Bay, first of the major Kimberley attractions, something we were looking forward to. We weren't dissappointed. The sail there meant negotiating the 10 knots current at the entrance, our first experienced with the crazy Kimberley currents. Well, we got there!

A stunning place, surrounded by limestone mountains, too bad the 100m high waterfall had dried up. We hung around there 3 nights, explored one of the creeks and climbed the small waterfall for a picnic. Saw our first croc, out in the bay, not big. He gave us a wide berth as he swished along.

Headed out this time during slack tide so we wouldn't have the excitement of rip tides at the entrance, then anchored outside waiting for the tide to switch the other direction for us to make our way north.

Later on I think I missed an opportunity to take the National Geographic wildlife picture of the year... We could've become rich! We spotted a humpback whale with calf paralleling our course, in time the calf must have strayed over to us to check out Ashiki because what happened next was mind blowing. I heard a splash, turned and saw a 40+' full grown humpback whale horizontal out of the water, a breach 2m above the surface only 30m off our beam! She crashed downward, a mighty belly flop, but not a huge wake from the splash. I think she was sending us a message and honestly I was a little scared and the camera was below. I did duck down to get it, but next she surfaced she was far away, taking her calf with her. That was an event to get the heart pumping!

We hung around Cape Leveque for two nights waiting for the more reasonable winds, since the Sunday Straits, the stretch of water across the top of King Sound, can be nasty in a blow especially if its wind against tide. I have seen a video of it, large foamy overflows in the middle of the sea, thus we didnt want to take any chances. The safer conditions would likely mean winds too light to get anywhere, so we were prepared with extra fuel onboard to motor the whole 25 miles if needed. The morning of departure had light breeze from the SE. Getting out of Cape Leveque was easy, with the tide we cruised up to 5.5 knots with all panels up. Rounding the point the currents changed to a cross direction and soon we were motorsailing to keep 3 knots. We kept at this for most the Straits, with the Tohatsu purring along at half thottle, 8 litres of fuel consumed in 8 hours. I was chuffed with that miserly fuel consumption, I think the little outboard will do ok in the Kimberley.

Our destination was a place called Silica Bay on Hidden Island, but that didn’t work out. We arrived in the dark to see three boats already anchored in the tiny bay and the space we shoe horned Ashiki into was too shallow. Sometimes plan A doesnt work out, we hauled the anchor back up and headed out into the night. There was no plan B, I had to quickly peruse the charts for an anchorage as we motored. The next spot a couple miles away wasn’t shallow enough so on we went, this time killing the motor and sailed as the current was favourable, taking us slowly up the channel towards Yampi Sound. At one point Ashiki drifted windless, turning around without steerage, but still making 1.5 knots in the right direction so Susie cooked an easy dinner and we dined together down below while high peaked islands slid by in the dark.

Eventually we settled on Myridi Bay arriving at 11pm, this was an instruments only entry as we couldn’t see much in the darkness, occasionally flashing the LED Lenser torch at the shore. The anchor seemed to hold, in a deep 14m, so that was good enough for us. We covered more that we usually do in a day sail, 48 miles in 14 hours, a long day. The following morning we discovered we were in a rather pleasant gorge. 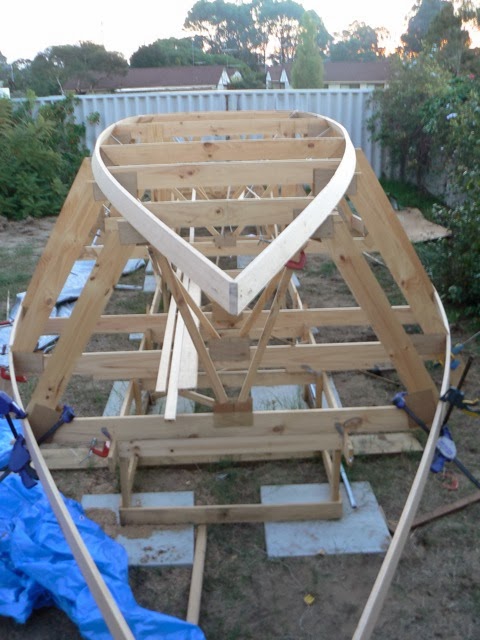